Everything Changes and Stays the Same 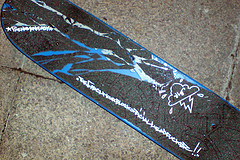 I remember when I was a kid, sometimes you'd give a girl a ride on your bike. She could sit on the handlebars or side-saddle on the main bar. If you had a book rack, she could sit on that too which was really nice because she'd put her arms around your waist. Two teens met in front of my house as I sat at the computer working. He had his skateboard and as she approached, he showed off a little. As she walked up to meet him, and the musing began...

The Muse
Jordon put his foot down and stopped the skateboard's forward progress. With a deft toe stomp, he flipped it up and caught it with his right hand. Perfect.

Kerri saw Jordon and wondered what he was doing, just standing there and showing off. She was going to the park to meet up with friends and hadn't expected to run into Jordon. She liked Jordon, but wasn't sure if Jordon liked her. As she approached, he put the toe of the skateboard on the ground and leaned against it.

"Hey Kerri, where ya goin?"

Kerri closed the last few feet between them and stood about two feet away. The cell phone in her hand vibrated―probably a text from the friends waiting for her. She ignored the buzzing phone and smiled at Jordon instead.

"I was just there. Tina and Erin are over there watching them shoot buckets."

"Yep. I was gonna meet up with them. We might go to the mall later."

"So what are ya gonna do this summer?"

"I dunno. Depends on what's going on."

Kerri looked at her phone and shook her head at the same time. "I don't have a boyfriend. They're wondering what's taking me so long."

Kerri pointed at his skateboard "On that? Right."

"No really. Come on." Jordon dropped the skateboard, pointed it in the right direction with his toe and held it in place with his foot. "Just put your foot on, hold my hand and step up when I push off."

"I dunno," Kerri said and looked dubiously at the brightly painted skateboard. Her father said they were dangerous and she'd seen more than a few kids take a spill on them. Still, Jordon was good with his board and she knew he hung out at the skateboard park a lot.

Tentatively, she put her right foot on the front of the board.

"Are you sure we won't die?" she giggled.

"Usually not," he answered. Jordon suddenly had a problem. He wasn't sure where, or even if, he should hold Kerri. He looked at her a moment, then made up his mind as she glanced back over her shoulder.

"Here we go," he said. He put his hands on her waist to hold her, pushed off with his right foot and they wobbled uncertainly for a moment, then as they gained speed from a second push, the board steadied and they were off.

Images
A flash of blue caught my eye and I looked up from my monitor. They were about fourteen and appeared in my view out of nowhere, just as most of the scenes out my window do. One came from the east, the other from the west. Where there were going I have no idea, but the park two blocks away seems like a logical destination, or it might have been someplace else. They talked for a moment, then he steadied the skateboard and held her hand as she stepped up. He looked as pleased as punch and then his smile faded. His hands wavered and his head cocked, then he made up his mind and held her waist. A push and then another and they disappeared from my view.