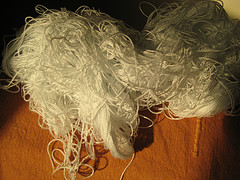 The mind's eye creates images in the space of instant. You see something, you hear something and the picture forms, and then it never leaves. Eventually something triggers the memory and you remember and new images form new thoughts and the muse writes and if you're lucky, it won't be a tangled mess...

The Muse
"I'm never going to get back. I'm stuck and I may as well shut it off and lose everything. But if I shut it off, will I get out? Will I be done? Is it over?"

Jeanie stared at her monitor and the menu displayed on it. She was hopelessly buried in a tangle of menus nested so deep, she'd never find her way back. The menu was surrounded and wrapped in squiggly lines that represented the tangled mess she created by going from one menu to the next and trying to find her way back to where she began.

"Damn that MJ. He promised me this wouldn't happen. Now I can't find my way back and that spreadsheet I was working on is lost forever!".

"Come on Jeanie, you can do this," she thought.

Jeanie pressed the "X" key to exit the current menu and return to the previous one. The computer gave a warning beep and displayed the message "Invalid Key Press. Press Any Key to Continue."

"Swell," Jeanie grumbled. She scanned the keyboard, but there was no "Any" key. She looked again and followed each row of keys from left to right, top to bottom and double checked the function keys and control keys. None had the word, "Any" on it, but she did notice the "Esc" key and remembered the class MJ had given―the "Esc" key escapes things. Jeanie pressed it and was rewarded when the "Press Any Key to Continue" message vanished.

"Alright, now let's see," she mused, almost as if she was writer. She scanned the menu choices and noticed none of them were labeled "X." One was labeled "Q" for quit, but if she quit, didn't that mean her spreadsheet with the pretty little graphs she had worked so hard to create would be lost? Jeanie groaned and reached for the phone to call MJ, but pulled her hand back.

"Screw this," Jeanie sighed. She pushed the "Q" key. The screen cleared and then displayed a new menu. A piece of the squiggly line disappeared and she breathed a sigh of relief.

"Okay so do I go back again now or did I have to go into another menu off of this one?"

Her finger hovered over the "Q" key, but she didn't press it.

"Now what? How did I get here and why? This is all MJ's fault, just call him!"

"Don't call, he'll think you're stupid and use THAT voice."

"Before or after he laughs at you for talking to yourself again?"

Jeanie pushed the "Q" key, but nothing happened.

Frantically, she pressed the "Q" key several times, then the Escape key followed by the "X" key and the entire row of keys beginning with "Z," but nothing worked. The NumLock light would not go on or off either.

Jeanie picked up the phone and dialed MJ's extension. "I need you now!" she nearly yelled into the phone when he answered. Then she hung up.

It took MJ about five minutes to appear in the doorway, since he stopped to fill his coffee mug, chat with the office manager and smile at her pretty young assistant.

This damn thing is locked up and I can't get back to my spreadsheet. If I shut if off, I'll lose all my work!

"I don't know. Look at this mess." Jeanie pointed at the monitor and the menu with the tangled, squiggly lines around it.

MJ walked around her desk to look over her shoulder. "That's some tangled mess," he commented.

MJ reached around her and pressed the "U" key. Like magic, the tangled mess of squiggly lines disappeared, the menu cleared and her spreadsheet reappeared, complete with all the pretty, colorful new graphs.

"Oh my gosh! How did you do that? What did you press?"

It was 1986 and there was no such thing as "Windows." Personal Computers used DOS, an unfriendly environment to those not familiar with computers. Jeanie―not her real name―was my boss and often called me to help her out. Jeanie did not want to use a computer and knew nothing about them, but her boss wanted her to create and use spreadsheets to help her manage the small company where we worked.

Since I was the main guy when it came to computers, I was volunteered to give classes to those who needed to use a computer. Jeanie was... let's call it testy... to be nice. One day she called me in and the screen was filled top to bottom with "bad command or filename" and she was mad. Later she told my boss I hadn't taught her well enough (translation―"I was working on the production schedule while he was teaching class.")

Jeanie's "problem" was addressed in the following Monday morning meeting and I volunteered to create a menu system tailored just for Jeanie and the things she did, even to point of loading her spreadsheets automatically.

Jeanie did not want a solution and was more than willing to make me look bad in order to get out using the computer. "I'll just get all tangled up in something like that," she retorted. And from that the image of Jeanie hopelessly tangled up in her menus was indelibly etched on my mind.

Photo of Tangled Yarn by Artethgray