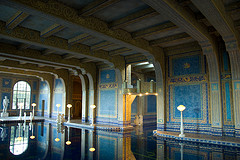 "Now over here I want the heated whirlpool hot tub, big enough for two of course and I don't want some cheap plastic thing either. All tile with seats and jets and of course I want to see some original designs. Heart shaped would be nice, but so would an oval with two seat backs."

"Sure," I answered and tried to suppress the smile. I took a couple of measurements―just to look good―and scribbled in my notebook. I was drawing a rough layout of the bathroom."

"Now over here," she continued on, "we need a vanity with a marble top and two sinks. I want mahogany linen cabinets on either side to match the mahogany vanity. Custom, solid wood cabinets. None of that particle board or plywood crap you guys try to pass off as good stuff."

"Yes Ma'am." I nodded, smiled and measured the wall and listened to her at the same time.

"I wouldn't think differently," I told her as I made more measurements and drew in my notebook.

"Good. Now on that end, I want the pool. Not something huge, just enough to fill in that space."

"A pool." Pools are problems. They weigh a lot, especially when filled in with water. They are also VERY expensive. "We can do a pool, what's under this end of the house?"

"Just the basement. Don't make it too deep. Say just four feet or so. I don't want anyone to drown in it."

"That would not be a good thing," I agreed and noted the depth.

"The sauna goes over there," she said and pointed. "Big enough for two people of course, no one but my husband and I will use this bathroom, so don't go overboard here."

"Cedar sauna," I said and made notes. She smiled at the word cedar and then I realized I was making a small mistake. "I meant redwood," I said. "That's the only wood for a sauna."

"Good thinking," she told me and waited while I made more notes.

"I'm sure there are things I'm forgetting," she mused, and then glanced at me out of the corner of her eyes. It was my cue.

"You should really do a shower," I said. "Something nice. Large, natural stone tiles, three or four shower heads and body sprays. Probably a rain-shower head over the center. A pair of matching stone seats..."

She interrupted my thought, which was perfectly fine by me. "Oh I like that. That sounds nice."

"Can we have those glass blocks for the walls that aren't stone?"

"Glass block walls." I wrote it down in my notebook.

"We could put a balcony out there. Knock out that wall..." I pointed at the wall, then added, "or a small deck. We'll put in large glass doors and..."

"Not even a problem," I told her. "A nice high privacy rail to screen off those who shouldn't see, but it won't spoil your view of the river or the bluffs."

"Lovely!" she exclaimed and clapped her hands gleefully. "My friend was so right to have me call you. I know I'm going to love this bathroom."

I looked around the 1500 square foot area and wondered what else I could squeeze in without having to squeeze it too much.

I wondered just how far she was willing to go. "One thing I'm sort of surprised you didn't mention was a fire place," I said.

"I knew I was forgetting something!" She fairly beamed and I just smiled and kept on writing...

Her irritated voice brought me back to reality. "Sorry I said, I'm driving."

"That was funny?" she asked, and then I realized I had chuckled. Chuckled because the first words out of her mouth after I answered the phone had been... "How much to remodel a bathroom?"

Never mind how big it was or what she wanted, just how much was it?

And of course, my imagination soared. I didn't get the job, I didn't even want it. Her expectation was a set price for any bathroom and it would cost X amount of dollars. She didn't want to talk about it, just needed a price. If I couldn't do that, then I must not know what I'm doing. At least, that's what she told me...

Photo of Pool by Richard Gillin at Flickr.com