The Second Day of Christmas 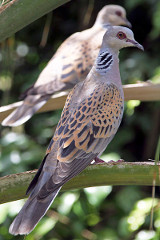 On the second day of Christmas, my true love gave to me:
Two Turtle Doves
and a Partridge in a Pear Tree.

Oh yes. Just what you always wanted. Doves. Turtle Doves, no less. And by the time Christmas is over, you'll have twenty-two of them―two for each of the eleven days left of Christmas. No, that isn't shopping days, as we have already discussed, because there are almost always just two shopping days left. If you don't get that, go look at yesterdays pos

Have you ever noticed while listening to or humming or even singing the Twelve Days of Christmas, that the authors of this song seem fixated on birds. The first four verses are about birds, and then the sixth and seventh verses as well. There is even a version from around 1900 in which the tenth verse of this song called for "Ten Cocks A Crowing." Go figure.

Birds as gifts. Whoever would have thought such a thing? It seems though, that this song's origins are rooted in France, so that may explain everything. (Please don't ask me to explain it, I can't.)

Turtle doves. You might be asking yourself why someone would give their True Love a pair of turtle doves. It seems that, because of the very strong pair bonds the birds make, they have become a symbol of everlasting love. Their high, circling nuptial flight is similar to that of other doves, and is rather spectacular to watch. Like the partridge in a pear tree, the turtle dove is a ground feeder and prefers seeds over other types of food.

They are migratory birds of the Columbidae family and native to the European and Asian continents. They nest as far north as subarctic regions and migrate in winter to northern Africa. They are slightly smaller than other dove species, about 9 1/2 to 11 inches long and three to six ounces in weight. Their mournful calls, a rolling turrrr, turrrr, turrrr, is both peaceful and relaxing.

You might just fall asleep listening to all twenty-two of them carrying on such a peaceful song. 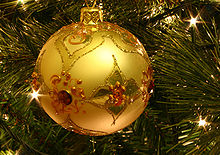 Imagine opening gifts on Christmas morning, just before you've had your coffee and are still not quite awake. There you are beside the Christmas tree, in your nightgown or pajamas and bathrobe, and with a big smile, the man trying to entice you into marriage presents you with a beautifully wrapped box with a beautiful bow atop the wrapping paper with its angels and trumpets and shining star so bright, tied closed with the pretty ribbons and he puts it right into your lap.

With barely contained excitement, you open the card, read it with smile, and set it aside so later you can place it on your fireplace mantle. Then off comes the bow, to set aside or perhaps, wear on your head like a goofy kid for a few minutes. Untie the ribbon and peel back the paper, so very carefully in order to save it in the paper shopping bag that contains twenty-five years worth of wrapping paper you had to save just because it was so pretty, but you haven't ever even looked at it again, let alone taken it out the bag...Muse! Focus!

Perhaps, all on its own, the box lid moves a little. Maybe you think it is under pressure a little from the gift inside. Maybe you don't notice. Maybe you do, but in your excitement, your barely contained excitement (because it is Christmas after all and this guy wants to marry you and this box has some weight to it, and it doesn't look like a sweater box, or a blouse box from the hardware store, and it doesn't have a picture of a power tool on it, so it just might be that hoped for gift that declares his everlasting desire to spend every last breath of forever with you.) you don't pay any attention to box lid.

You lift off the lid.

The box explodes in a flurry of feathers and flapping wings in your face as the minature covey of birds escape the box and your arms fly out in seven different directions at once, the box, ribbon, bow, paper and lid scatter around the room and your scream is nothing like the soothing call of the doves.

"Turrr, Turrr, Turrr," they coo from a hidden branch on the backside of the Christmas tree.

When your heart stops pounding and the adrenalin quits surging through your veins, you might just think to stop and ask, "What in the name of St. Nick was that?"

Oh yeah. I can just imagine giving that gift eleven days in a row. Sure.