The Third Day of Christmas

On the third day of Christmas my true love gave to me:

French Hens would make a fairly good Christmas dinner and if there were three of them, you'd have quite the feast. Alive and pecking about the barnyard, these pretty chickens weigh in at about 9 pounds apiece. Dressed and stuffed for the roaster, they'd be the basis for a fine Christmas meal. Imagine giving three of them to your True Love every day for 10 days.

Interesting Factoid: The Faverolles is a breed of chicken that developed in France during the mid 1800s. They have five toes instead of the usual four. 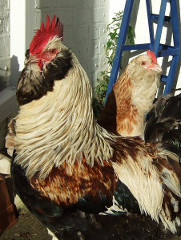 That is a grand total of thirty hens and if they don't have a freezer, why you'd just better gift live hens rather than dressed, because that many hens will just go to waste unless you're feeding a small army, like say my brothers and I. Add in all my nieces and nephews, and you've got that small army to feed. Still, three hens a day for ten days is a lot of hens.

Or, if you're not interested in roasting your French hens, you could always keep them for egg laying. Thirty hens could give as many as thirty eggs a day once they get cracking I mean laying. Now the song doesn't say a word about any roosters, but back in the 1900s one version of the song included ten cocks a crowing. And crowing they would be with thirty hens to chase about. Probably there would be a fight or two as well.

If you decide to bring live French hens as a present, do you just show up and release them into the backyard? Maybe you should gift wrap them in a dark but somehow secretly vented box so the poor things don't suffocate. And keep in mind, that's almost thirty pounds of Hen you're wrapping up in that box. I'm sure they'd keep nice and quiet since its dark in the box, so at least you don't have to worry about that.

Are those hens going to sit still while you wrap them up? I sort of doubt it. They'll be flapping feathers in your face as they try to escape, and when you get one in the box and reach for the other... well I'm sure you see the dilemma, don't you. You're going to need some help. Maybe you could call upon the eight maids a milking if you have them already (You DID do the Christmas shopping in advance, right?).

It would have to be the maids you would call on for help. They are the only people in this song who would know anything about hens or farm birds or farm animals in general. Oh yeah, I did say farm animals. We're not there yet, but you can bet, we'll be talking farm animals before this nutty muse is over with.

Where was I? Oh yeah. Helping with farm critters. The nine ladies are not going to help, that would just be so un lady like. The Lords (if we get Lords a Leaping and not Cocks a Crowing) are going to be just as opposed to helping with hens as the ladies. And those pipers and drummers, what good would they be to help? So yeah, you'll have to count on the maids to stop milking for a few minutes and give you a hand gathering up those hens and putting them in a box.

After the third day of Christmas, we already have quite the menagerie already. Three French Hens, Four Turtle Doves and Three Partridges and Three Pear Trees. As the song continues, you can see the need for something more than a simple home with a little backyard to keep these in. We need something bigger and more expansive. More like a farm and barn. But we will explore that on another day.

Video: The 12 Days of Christmas by Tennesee Williams