The Fourth Day of Christmas

On the Fourth Day of Christmas, my True Love gave to me:

Wait. What? Colly Birds? I thought it was "calling birds" and now, after hearing and singing and listening to this song for fifty something years I find out it is Colly Birds?

Interesting Factoid: Rumor had it this song was a code for teaching Christian tenets when being Christian was illegal. Apparently however, this rumor surfaced in the 1990s without substantiating evidence.

Just when you think you know something, someone flips it over on ya. It sorta reminds me of this guy who called into a local radio station to complain that the DJ was misnaming the song by The Beatles, "Hey Jude." This guy was so stoned he probably couldn't remember his own name, but he was certain the name of the song was "Hey Dude."

I kid you not, it really happened at a Chicago radio station. Not only did he call in to correct the DJ, but after the DJ told him he was wrong and hung up, the guy had the stones to call back and try again. "Hey man ya know, like, I'm really sure it's 'Hey Dude'. If ya listen close he says 'Hey Dude'." 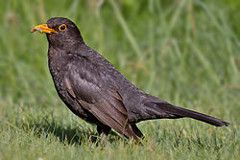 Colly Birds. I had to look them up as I had no idea. It turns out the word 'Colly' means black or black as coal. A colly bird therefore, is a blackbird. Huh. Why the heck not just call them blackbirds? Well it turns out the word 'colly' is an English word, so I guess that explains everything. Sure it does! They like odd names for things, like 'boot' for the trunk of a car.

But the real question is, why would you give colly birds to your true love in the first place? At least with the other birds mentioned previously in the song, you can sort of justify it, even if you have gone over the edge by giving so many. French hens can lay eggs or end up in the roasting pan. Turtle doves are a symbol of love, and you could keep them in a cage (although 22 of them might be over doing it a bit). And well, I am still looking for recipes that include both partridge and pear, if anyone could help...

You could of course, go back to the old rhyme, Sing a Song of Sixpence, and put the blackbirds in the pie. That would make it easy to deliver them, if you made two or three pies. In the rhyme, you put four and twenty blackbirds into each pie. By the end of the song, we have a grand total of 36. So fudge a little and make two pies with thirteen in each. A pie with twenty four blackbirds would be an awful big pie anyway.

It even works in the rhyme. Six and Thirty Colly Birds, Baked in Pies.... 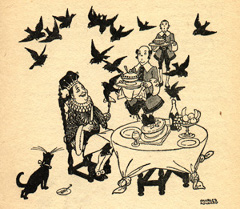 I knew I was a genius, and a cook. Except, how do you bake live birds into a pie without, ya know, baking the birds? See what I mean? If anyone can answer this riddle, I'd be happy to include it.

Thirty six colly birds would be quite the flock. Just think of the mess after just a few hours of flying circles about the Pear Tree with the partridge in it, chasing the turtle doves into their cages, and pecking at the eggs lain by the French hens. And all the commotion too.

This brings up another thought. What did that poor girl think when she had received all those birds by the end of Christmas? Tell you what, give your True Love all those birds, then ask her what she thinks.

Sketch of blackbirds escaping a pie courtesy of Rutgers University