The Fifth Day of Christmas

On the Fifth Day of Christmas, my true love gave to me:

Interesting Factoid: The use of gold in ornamental objects dates back more than 6000 years, and there are Egyptian hieroglyphs dated prior to 2600 BC that describe gold.

And so the menagerie grows by ten more birds, but the outlook it brightened by five rings in a shiny golden color. Are the rings made of gold, or just gold in color? If we're talking about real gold here, this guy has some seriously deep pockets because by the twelfth day, he will have given forty gold rings. 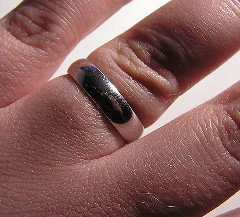 I suppose they might just be gold plated, but then you'd ask if they had gold plating back in those days and I just don't think they did. Far more romantic to think they are real gold.

But let us take a different tact and consider the actual song for a moment. Most of the verses, with the obvious exceptions of verses one and five, have a certain rhythm to them. That rhythm is not the same throughout, but it breaks specifically for this verse and also for the first. I'll confine my comments at this point to verse five.

One has to wonder if this was done on purpose to highlight verse five, with the obvious grandeur of five gold rings. Whether you sing the verse as 'five gold rings,' or as 'five golden rings,' the second word is pronounced with two syllables, and all the notes are longer notes. This becomes clear on a sheet of music.

The melody is played in 4/4 time, which means that a whole note gets four beats, a half note is two beats and a quarter note is one beat. An eighth note is one-half beats. Most of the melody is made up of quarter notes and eighth notes, which moves it right along until we come to the last three words of verse five. Verse five has one half note for the word 'Five,' followed by two quarter notes for the word 'go-ld or gold-en,' and ends with a whole note on the word 'rings.' This has the effect of drawing out the four syllables of the verse to eight full beats.

In other words, or in layman's terms, you'd tap your foot eight times just for verse five, even though it is only four syllables long.

At this point I am sure most of my friends are rather surprised that I know anything at all about music. Well, I'll have you all know that I studied music for six years and used to play organ, piano, and anything else that had keys very well, and that included some rather complicated classical music. Beethoven mostly. A little Chopin. Uh huh. I did. This may explain why I have decided to write about this rather whimsical tune.

For those who are interested, the piano concerto that (I hope) you're listening to is Chopin's Nocturne Op. 9 No. 2. This was one of my favorite pieces of music to learn and play, topped only by Beethoven's fifth symphony. It is not however, me playing what you're listening to.

I digress once again, but since this my blog and my words and my writing, I'm allowed once in a while. Usually I'm right on point, don't waste words, but I'm being a little whimsical with this series and letting the words take me where they will.

Another aspect of this verse that intrigues me is that this is the only verse that offers something that is not alive. Every other verse has living creatures or people in it. I don't know that there is any significance to that, but one has to wonder. The fifth is also last (beginning with the first) in which no action is specified, all the rest have some sort of action in them.

At any rate, I hope you are enjoying my series on the 12 Days of Christmas and keep reading.

Music Score taken from The 12 Days of Christmas author unknown.