A is for Aromatic Memory 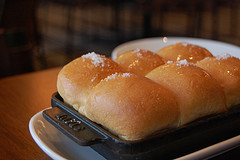 Aromatic memory. It drifts into your senses and dislodges the past from its hiding place with a gentle prod of crowbar-like insistence. Images swirl like the scent around you, twisting, wending, finding their way inside and there is little to do but pause and savor moments in time past. Moments long gone. Moments never forgotten.

The sidewalk is busy and people move quickly. Commuters on their way into the city hurry for the train with their cups of coffee and paper bags that carry sweet roll, donut, muffin or scone. Newspapers tucked under arms, briefcases and backpacks. Umbrellas for cloudy skies.

The early morning hustle near the station speaks of work or maybe adventure for a gaggle of schoolchildren on a field trip. There's much to see and do in the city. Museums, theaters, aquariums and planetariums. They giggle and laugh, each with their own little pack of treasures and necessities, herded by nervous chaperons.

The chaotic rush is lost as the aroma of baking bread outside the bakery overwhelms senses. Transports to another time, another place. A simple life. A warm kitchen and Mom. Flour sacks on the table. The yeasty smell of rising bread. Melted butter in a pan and pull-apart rolls with crusty crusts and soft, chewy-in-your-mouth insides.

TV plays in the background, younger brothers watch cartoons, wait in excited anticipation. Mom is making rolls and there isn't much that would pull anyone away from the house. Not friends, not free candy, not the promise of biting fish in the river.

Timer on the stove buzzes. Four boys cry out, "Mom. The Buzzer's Going Off!"

Even though she's in the kitchen and hears it plain as the kids.

Like magic, the four appear in the doorway, but it isn't time. "They're not done yet. Why don't you play outside..."

Waiting seems... impossible. The smell of bread drifts through the house, permeates every nook and cranny from basement to attic. And everywhere in between. Through windows to the street, the yard, the tree house, and tire swing and...

On the stove, pans of rolls rise beneath linen flour-bag cloths, cut from honest sacks of flour in an age long past by a grandmother's grandmother. Passed down through time, hand to hand, mother to daughter (and now mother to son) like the recipe and method that builds the aroma of baking bread in a house. Generations past and gone are mere moments in time, but now lifetime is joy and sorrow, labor and love; children and grandchildren and family create a past, a present, a future.

Baking bread wafts onto the street and walkway, carrying the memory of time and people from the past. The present is here, but the past is gone, like a mother who once baked bread for her family, but left for another place, another time, where simple things like love for family count more than the bread baked out of that love.

Into the past, transported by memory tickled from beneath the surface present. The oven door opens. Ears tuned in time with cues of thump thump thump to proof the baking. Time paused as the intense aroma pushes out the oven door. Pans on the cooling racks. Pans into the oven. The swish swish swish of the butter brush transforms the hard crusty crust into gleaming golden glory.

Like a whisper unheard shouted to the world, "It's Done!"

The first two pans are out, the next two in. To the kitchen march, scramble, run, jostle (like commuters on the sidewalk) and wait. Five minutes. Ten. The waiting is finally over. The aroma-taste provides no satisfaction, but tantalizes, demands, requires the anticipation of that first golden roll.

Hot, steaming bread peels from the rectangular loaf, each roll nearly identical from years of practiced form. Butter spreads like warm butter on a hot roll (because it is) and fingers tingle with the heat of bread barely cool enough to hold.

The first bite is a bit of heaven that is so much home and Mom and everything known that is good and right and well with the world. Center gone, time for an entirely different experience in taste, texture, magnificence.

Slather more butter on the inside of the crust and dunk in ice-cold whole milk. The combination of crunch and chewy and milk and butter and...

Train whistle jostles, bumps, nudges me back to the sidewalk. A blink and "Clang! Clang! Clang!" the bell tolls as the engine pulls the cars away from the station.

Missed the train and I don't even care. I can still smell the bread.