B is for Bumpkin 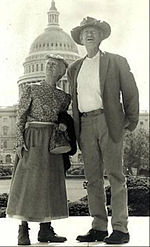 "Look at that Bumpkin." Know what I'm talking about? Oh you don't? Huh. Well let me just fill you in a little.

A bumpkin refers to someone who is ignorant or uneducated. It is a derogatory term often assigned to people who live in rural or agricultural areas by people who live in larger towns and cities. The meaning infers that someone from the country lacks social expertise, street smarts, or just plain, everyday knowledge.

It conjures up the image of tall, muscular guy in a flannel shirt and denim overalls with a dumb look on his face as if confronted with something that doesn't happen in everyday life on the farm and he can't conceive that such a thing is even possible.

Fact is, if it came to living through a holocaust, the country bumpkin would probably be better equipped to make it in world suddenly bereft of all the things that people take for granted these days. The couple that shops at the deli below their two-bedroom, one-bathroom cramped apartment and thinks they are at the top of the food chain, would quickly find themselves begging the country bumpkin for food or clothing.

"You country bumpkins would never make it in the big city."

Ha. Let me say, this is one country bumpkin who is neither stupid or ignorant and has in fact, made it in the big city. I've been to the barn to squeeze myself of glass of milk, straight from the factory. I've ridden the commuter train from a suburban home to the downtown office , everyday for years. When a would-be pair of muggers stepped up to see how easy the pickings were, they decided the pickings were easier elsewhere.

To be fair, there are a few country bumpkins who are not so smart, perhaps even ignorant, and maybe they could not make it in the big city. To be equally fair, the big city has its share of bumpkins too. Maybe more than the country does.

How many big city folk could make it on the farm, without their walk-downstairs-to-the-deli way of life? The big city park might be part of the great outdoors, but the only bears you'll find there are in cages, if any at all.

The arrogant city person thinks there's nothing to living in the country, and they go and stay in the campground in their little tent and make a little campfire with easy-light, ready-made campfire packages and roast their weenies and marshmallows and think they're roughing it.

Hit the road Jack. Leave all that crap behind and take a blanket with you. Gather some sticks and tinder, little tuffs of weed fuzz or birch bark or cedar shavings, take one match, make it light the first time and get that fire going. Fail and you're cold tonight.

In the morning, get up and catch whatever is biting in the creek or lake, gut it and roast it over the fire. Enjoy Mother Nature's bounty the way she provided it. Throw a tarp over a rope when rain threatens, get your bed off the ground and weather the storm in relative comfort.

And the next time you see that country bumpkin with a confounded look on his face, just remember that he is probably only wondering why God made fools that live in the city.