F is for Fairies 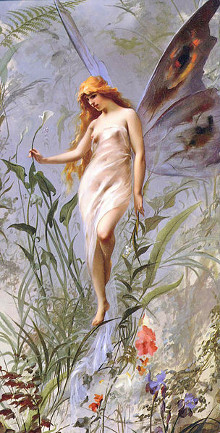 I wonder if you've ever seen a fairy. These magical creatures usually have a human like appearance but with dragonfly or butterfly wings. Their skin is like porcelain and may be tinted a green that can only be found on...fairies. Fairies can change their size and shape at will; as small as a mosquito one moment, bigger than a human the next. One of the most famous of fictional fairies was Tinkerbell; she often appeared as a tiny, almost invisible spark that flitted here and there, doing magic. Other times she was a delicate, tiny creature with gossamer wings.

Just like people, there are good fairies and bad fairies, and fairies who fall in between. We've invented fairies that do good. The tooth fairy has a fetish for teeth and collects them, leaving anything from a dime to a dollar in exchange for a lost molar or incisor. For some reason, it seems that older you get, the less likely it is the tooth fairy will visit. I don't know of any elderly people that lost a tooth and were paid a visit by the tooth fairy that evening.

Cinderella had Fairy Godmother. She made Cinderella a beautiful evening dress with glass slippers and fixed her makeup as well as any makeup artist. No belle of the ball could ever properly arrive on foot, especially in glass slippers, so Godmother used her magic to turn a pumpkin and a few mice into a magnificent horse-drawn carriage. There was one catch. The magic, like all magic, only lasted for a while. Cinderella had to leave by midnight or be caught in her rags. The horses would turn back into mice, and the pumpkin would once again be suitable for baking pie.

For some reason, the glass slippers didn't change back and they allowed the handsome prince to find his new princess so they could live happily ever after, while the evil stepmother and her daughters gawked in dismay and envy.

I always thought it was nice that Cinderella met the prince, but it was even better that Stepmother and Step Sisters got their due.

Fairies are like the butterflies of the magical world we cannot see. They are beautiful and delicate, very smart, and most use their magic for good things. We usually can't see them because long ago they realized that people were not so smart as they, and were greedy and some were even evil. Some humans wanted to catch all the fairies and force them work magic so the humans could be rich and powerful.

All the fairies gathered at midnight around the fairy circle in the light of a blue moon and together they worked magic.

The magic made them invisible to human eyes, unless the fairy wanted a person to see them. That is why so few people have ever seen a fairy. Some animals can see them though. Dogs especially, and cats too. Cats want to catch them and that amuses the fairies, because they are too quick for the cat and never taken by surprise. Dogs find them curious and fairies like to ride on their noses, which the dogs are always willing to allow.

Fairies also visit writers. They sprinkle magical dust and blow it into their faces. Suddenly, the writer has to write. It is impossible to resist. He or she doesn't even know where the thoughts are coming from, they just flow and scenes play out in the stage of the minds, or poetry flows in rhythmic rhyme. Faster and faster the writer writes, trying to get it all before the dust wears off and the scene is gone or the poetic threads dissolve.

Have you ever seen a fairy? Did they sprinkle magical muse dust in your nose to tickle your inspiration? Whose idea was it to create fairies?