G is for Grotesque 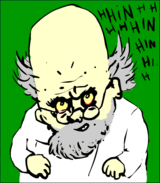 My friend Raymond over at Incoming Bytes had a good post the other day about eccentricity, and it reminded me of a college professor that taught advanced math. One of his favorite words to use in reference to certain ways of doing things was "Grotesque." He used it as a teaching tool.

It is doubtful many people ever pronounced his name correctly, or even got the spelling right. We'll just call him Dr. Math.

Dr. Math had his own grotesque manners in certain respects, beyond eccentric if you will. For one thing, as dean of mathematics and author of numerous books on mathematics, he got away with things other professors did not. Like smoking in class. Yes, it was the early eighties, but smoking in class was forbidden, even for the instructors.

Dr. Math chain-smoked Carlton cigarettes, one right after another, all day long. Only once did I see him light a cigarette with a lighter; an elegant, slender gold lighter with an electronic spark that ignited the lighter fluid with an audible snap.

The first day of Applied Analytic Geometry with Calculus was the first time many of those in my class ever met him. He showed up in a rather grotesque fashion, one shirt tail hanging out, unkempt hair, glasses askew and of course, a Carleton between the ring and middle fingers of his left hand. We all sort of chuckled. What sort of mad scientist professor was this?

Though he carried the class textbook with him to every class, he never once opened it the entire semester. He would quote from pages, tell us about incorrect answers in the back of the book, and joke about mathematics the way some people joke about sex, and then relate it to something in a specific paragraph in the text.

He would talk at a maddening pace you could barely follow and write just as fast on the chalkboard. In the beginning, the chalk squealed so much we were all cringing. By the end of the semester we were all immune. He would take a puff on the Carleton, switch it to his left hand, and write on the board. Then another switch, a puff, and switch back.

One day, just as he was about to light another Carleton from the almost-spent butt of the one he held, someone asked a question that lit up a bulb in this man's brain. The smoke fell from his lips to the floor and he crushed it with the toe of a shoe never once polished after it left the factory. He wrote and talked, explained and waved and poked at the textbook while listing pages of information and facts so obscure they were unknown to modern man until he discovered them. When finished, he took a deep breath, raised his hand to his lips and attempted to take a puff from the stick of chalk.

Disgusted, he threw the stick of chalk to the floor. "Aahhh! Grotesque!" I can still hear it. That was the one and only time I saw him use a lighter, to light up another Carleton, in spite seeing him light and smoke hundreds if not thousands of cigarettes.

To be fair, he was a man of great intelligence. He held three doctorates from different universities and what was truly amazing about this man, was the way he could apply mathematics to anything. It didn't matter if you were studying electrical engineering as I was, chemical engineering, physics, architectural engineering, or anything else, if you had a question that involved math and how it pertained to your field of study, you were better off going to him than anyone in the other departments.

To see him outside of class, on his way to or in his car was grotesque in itself. His London Fog coat, once handsome and befitting a man of his stature, was stained, covered with small burn holes, and smelled of stale cigarette smoke. I'm sure he never noticed.

In our engineering classes, many of us used state-of-the-art calculators and some even had hand-held computers. Some of our engineering professors used calculators, others used slide rules. One even had an abacus in his office and would use it to demonstrate certain principals of mathematics.

Dr. Math, I'm quite sure, didn't own such crude instruments of calculation. He had a better instrument--his brain. Often, if presented a problem that required say, the cosine of a angle, he would gaze into the air a few seconds (usually a good moment for a puff), then write the cosine on the board to ten decimal places. Our calculators would give us eight places back in those days.

It was revealed one day that he was calculating trig functions in his head. He used a form of calculus called a Taylor Series, which (among other things) allows you to calculate trig functions. Most people look them up in a table; even calculators look them up in a table. A Taylor series in itself is not very complicated, but it requires a lot of number crunching. Just to do an approximation that is not even close to accurate requires more temporary results than most of the population can remember.

His accuracy was dead on. To eight decimal places anyway -- that was as far as any of us could be sure of, since none of us had the means to calculate trig functions out to ten places, even with a calculator or hand held computer. Imagine doing computations that involved many numbers carried out to ten or twelve decimal places. Can you even remember two such numbers while computing a third?

For some, to even think of doing such a calculation is...grotesque.

Despite his grotesque eccentricities, he was a very kind and patient man. Once I begged off work so I could go to his office for help. I arrived at six; he was just leaving and I met him in the hallway.

"Michael! Ahhhhhh. What brings you up here?"

I explained that I was lost in the current fuzz of the current topic and how it related to my other classes, which relied heavily on understanding the math. He all but dragged me back to his office (Thank heavens I smoked or I never would have survived that experience) and spent more than four hours tutoring me until he was certain I understood. About nine in the evening he suddenly remembered he had been on his way home and called his wife.

Most professors would have sent me to a teacher's aide or told me to hire an upperclassman tutor for that level of help.

Despite his amazing level of knowledge and the fact this his brain operated on a level most people could not even comprehend, he could break it down, make it real, and explain how it worked.

It was clear. He taught that class to students from many fields because he could do that. He was the guy who could make sense of things in as general a way as you needed, or be so specific as to narrow it down to specific aspect of any field.

Often, he would demonstrate what he called the "brute force" method of doing things. He'd break down a complex equation into forty iterations written on a chalkboard, then he would stop and wave his arms about.

"It's Just Grotesque!" he would exclaim!

With wide sweeps of his arms, he'd erase the chalkboard with his shirt sleeves and write out the elegant version of the solution.

Sometimes I think about Dr. Math and his odd, eccentric behavior. He appeared to be in his middle fifties at the time I knew him so it is possible, if the Carletons didn't kill him, that he is still alive and pondering the great universe in his own world of mathematics.

Do you know anyone eccentric? Grotesque in the sense they don't fit in with the rest of society, even with the eccentrics among us?

Illustration of a Mad Scientist by JNL 2005 on Wikimedia Commons