H is for Havoc 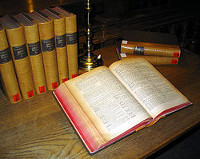 Those are what I call specific definitions with a very general meeting.

Here are two examples: Look at the havoc that puppy wrought in this room. Look at the havoc caused by that nuclear bomb. The first example might inspire images of a room with a chewed up couch, emptied wastebasket and the shredded contents strewn everywhere and puppy messes on the carpet. While not pleasant, it is not nearly as disturbing as a completely destroyed major city with the few survivors suffering from radiation burns and sickness.

Both examples are correct uses of "havoc" because they both describe wide and general destruction, albeit from two different points of view.

This is one kind of trouble the English language causes for people who learned it as a second language and don't necessarily speak it everyday. Point of view is a big deal in English and it causes havoc -- great confusion and disorder -- for people who don't use it often or are new to it.

Often our slang creates havoc for the same people. A common slang phrase is, "come on." It can express disbelief or surprise or dismay. These are slang meanings that have little to do with the words used. A very similar phase, "come on," orders or compels another to go along with in a physical way, or to join them in accepting an idea. As a direct meaning, come means to go to a place or person. You can teach your puppy, "come" and it will go to you.

One man who immigrated to the United States spoke perfect English. His diction was flawless, his accent almost non-existent. Even so, he had great difficulty when he first came here because his knowledge and use of slang were not a part of his education, nor was situational use of words and phrases like "come on."

This serves to point out that context is another area of the English language that causes havoc. How we interpret "come on" depends on the context in which it is used. If told they won the lottery, a person might say, "come on," in a disbelieving tone. Or someone might say, "come on," I'm going to pick up my lottery winnings. The context defines the meaning in both cases.

When someone is unfamiliar with contextual use of words or phrases, those words and phrases can create havoc in their mind. Confusion. Great confusion if something is important enough to affect them or cause them trouble.

Consider the havoc created by imprecise use of words or poorly constructed sentences. Leave out a comma and you invite people to engage in cannibalism. "Let's eat grandma." It may seem silly, but the phrase does mean that you and those you are speaking to should eat your grandmother.

What was actually meant was, "Let's eat, Grandma."

Here's we have added two elements. The comma after eat interjects a pause which concludes the action of the sentence. Grandma is capitalized which indicates a proper noun and the meaning becomes clear. You are addressing your grandmother and telling her you want to eat.

Imagine the havoc if your grandmother thought you were going to eat her.

Using good English is important. Although the examples given here are simple, they do highlight ways to abuse the English language and create...havoc.