L is for Limburger 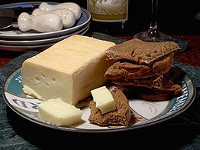 It seems forever since I indulged in a pungent slice of the smelly cheese that my grandfather loved to eat. I remember as a very young boy when I stayed with my grandmother and grandfather, he would take me with him on his Saturday errands, which were much more than errands.

Of course, growing up in Wisconsin meant a diet rich in dairy products, which included all kinds of cheese and other things made from milk. Most people are familiar with Cheddar and Baby Swiss, and that awful processed American sold in singly wrapped slices that Kraft promotes so heavily, but there are other cheeses that will tingle your taste buds, wrinkle your nose, and take you into entirely different world of flavor.

My memories of accompanying "Poppy" to the cheese factory on a Saturday morning will stay with me forever. We would go and the nice lady behind the counter would package up the order, which often included a bottle of buttermilk and a foil-wrapped package of Limburger.

Limburger. My brothers and I called it stinky-feet cheese.

It is a soft cheese, barely hard enough to slice if you keep in the coldest part of the fridge. It is white with a grayish to brownish-tan, not-quite-crusty outside. The outside is the mold that gives the cheese the pungent flavor. Don't cut it off, you won't get rid of the mold, the smell, or the flavor, which has permeated the cheese and is part of the Old-Wisconsin charm of eating it. It also won't hurt you to eat it. Trust me on this.

It isn't cheap. I've been telling Mrs. Goodwife that I had a taste for Limburger and I've been looking for it in the stores we shop, but haven't found it until just this week. I was shocked at the price and almost didn't buy it.

Seems like the old-world, soft and smelly cheeses are slowly falling out of favor. They are so flavorful, that I can't imagine a world without them. Today, the only US company that makes Limburger is the Chalet Cheese Cooperative in Monroe Wisconsin. There is also a factory in Canada and more in Europe, mainly Germany, that make the cheese.

Poppy was a well-known and popular man in the town and county he lived in. Everywhere he took me, he knew everyone and would talk to them. Often, we stopped at places where there was no errand just to talk. Places like car dealerships, lumber yards, and hardware stores. We'd stop in and he would talk to the man behind the counter, the salesman in the lot, or any number of other people that were there.

Just like many of the people he talked to, Poppy was a store owner, in addition to working at the local paper mill.

How could I ever forget sitting down to a snack with Poppy? He'd take out the buttermilk, the package of cheese, and a couple of my grandmother's rolls -- a recipe passed down to my mother and so favored in my family that great-grandchildren will talk and write about about them. We'd sit and put butter on the rolls and add pieces of that pungent cheese. We drank buttermilk as we ate.

Limburger cheese is indeed stinky. Some people have equated it to bad body odor, but I don't smell the resemblance. My brothers and I only called it stinky-feet cheese because it does have a very strong odor. An odor almost as strong as the flavor.

Last night I opened the $20 a pound, foil-wrapped package of cheese and cut a slice. Mmmmm. Memories flooded back. I put some butter on some bread, sliced more cheese and made a sandwich. Oh the taste. So strong my eyes almost watered. Intense flavors.

Almost laughingly, I gave the new puppy a taste since she was begging for it. She loved it and wanted more. At $20.00 a pound, I can promise you, she isn't getting much of what is left.

So Poppy, if you can read this from heaven, I still like Limburger sandwiches and I love the memories of Saturday-Morning errands with you.