Pheasant Under Glass - NOT! 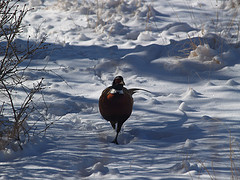 It is the day after Christmas sometime in the late 1990s. We are heading home from northern Wisconsin back to Illinois and my wife Margaret is driving the pickup. There are two dogs in the cab and I'm half dozing, drowsy from the holiday excitement, one last overstuffed meal from mom's kitchen, and lack of sleep. We top a rise and you can see for a good two miles. Ahead on the right is a large field with a truck parked in it, some one hundred or so yards from the road. Two people stand behind the truck wearing orange vests and they are obviously going hunting. As we draw close at seventy plus miles per hour, the muse begins to write...

The Muse
Ken watched as his son Mark, just twelve years old the previous month, loaded the single-shot 20 gauge he had given him for Christmas. The boy had completed his hunter safety course that fall and had his certificate which was as good as a hunting license for one year. Despite Mark's successful completion of the course, Ken kept a watchful eye on his son. Firearm safety is something you learn through practice, and practice makes perfect. Nothing short of perfect is acceptable when it comes to firearm safety. Ken's father had taught him, and now Ken was teaching Mark.

Mark was excited. They hadn't had a chance to hunt after he completed the course because his dad had been busy finishing the fall harvest and preparing for the winter. Then his dad gave him the new shotgun for Christmas and Mark was proud, awed and excited. There were just a few days left in the pheasant season and Ken could hardly tell his son there wasn't time to go hunting. In fact, he'd planned for them to spend the day together hunting and he knew there were pheasants on the property. A day on the farm not spent farming was a rare day indeed and the fact was not lost on Mark.

Earlier that year, Ken had spent time with Mark, practicing shooting with clay targets thrown with a hand trap. Mark was developing into a good shot and Ken knew if given a few chances, Mark would put a pheasant or two on the table.

The long, shallow ditch was perfect pheasant cover. The depression provided shelter from the wind and the small shrubs and tall grasses hid the birds from predators like foxes, coyotes and hawks. A good strategy for pheasant hunting is to walk a ditch, hedgerow or fence line, one hunter on each side.

Ken pointed to the ditch and said, "You take the left, I'll go down the right side."

"Okay," Mark replied, obviously excited. He didn't realize his father was giving him the easy side. If a pheasant flew up and veered left, it was easier and more natural to shoot in that direction. On the right side, you had to turn to follow the bird.

The two started walking slowly along the ditch, separated by ten or fifteen yards of sparse cover that consisted mainly of low brush and tall grass. Here and there remained a few cattails, their fluffy heads shredded in the late fall winds and early snows.

Mark walked in and kicked and stomped on the pile of brush left behind when Ken had trimmed the bushes down the previous spring. Still, the stomping and kicking revealed nothing.

They continued on, walking slowly and Ken giving advice. They stopped here and there to kick another brush pile or examine a piece of cover. Ken was sure the ditch held pheasants most of the time, he'd seen them when working the field. Still, no birds flushed and they came to the end of the ditch.

Mark was a little disappointed and Ken could see it. "Well that ain't the only place we've got birds," he told his son. "Come on, we'll go try the north field and walk the fence lines over there."

The two shouldered their shotguns to walk back to the truck and try elsewhere... Father knowing that sooner or later, Mark would get his chance. Son eager to show he had learned what his father had taught him and excited at the prospect of it.

The Images
As we passed the hunters, I glimpsed the shiny new stock on the boy's shotgun and the sun glinted off the new, blued barrel. I saw the boy open the shotgun to put in the shell and even at highway speed and the distance between us, the excitement on his face was plain to see. The man was talking to him, pointing and giving instructions and the boy was nodding, listening―patiently impatient. We passed the pair and then the shallow ditch in fifteen seconds or less and there at the end, watching and listening, was a single rooster pheasant with two long tail feathers. He was alert and knew for certain that danger was afoot. Just as we passed by, he turned and ran for the cover of a fence line, just another forty yards away. The "No Hunting" sign nailed to the fence post was plainly visible.

Photo of Winter Pheasant by Lost in Fog at Flickr.com